Seattle RailsBridge has been gaining great momentum – the women’s outreach workshops are growing in size, sponsorship*, and community support.

A couple of weeks ago, we held the second Seattle RailsBridge workshop, which had 25 students and 20 teachers/TAs.

Sonia, one of our awesome volunteers, wrote up the following review of the event:

I just got back from the second Seattle RailsBridge and I wanted to tell you all how well it went. Very!

Even the weather cooperated by being overcast and foreboding, making us all feel just fine about spending Saturday inside writing code.

The curriculum (http://seattlerailsbridge.heroku.com/toc) was very clean, well-thought-out, and entirely achievable in the given time without being trivial. The color-coded structure of the lessons made each one easy to follow, and the “What Just Happened?” sections were a wonderful way to sum up each step. Well done!

After the class one of the students who I had worked with praised the class effusively. She said, “I felt like I could ask anything and I didn’t worry if it was a stupid question or not. I felt like I could take my time and still keep up. And everyone was so incredibly nice! The teachers, you TAs — everyone! I was very comfortable there.”

I explained to her that it wasn’t an accident that she felt so comfortable, that we worked hard to make it a woman-centric event, in both subtle and obvious ways. It makes a difference, I said, to have the class be mostly women (we had a few male students and most of the TAs were male) because there’s a sort of gentler silence in the room when it’s mostly women, a sense of open space into which you can ask questions. In a male-majority class, you don’t quite get that.

I was impressed with [the] teachers. Both of them did some subtle and powerful things, including being encouraging without condescension, making plenty of time and (emotional) space for questions, being supportive, and staying light-hearted.

Afterwards there was a general sense of excitement about doing more development. A number of women seemed quite ready to pursue more RoR study. Inspiring! I intend to be part of the next one.

*This event was sponsored by Substantial, Blue Box Group, and PeepCode. 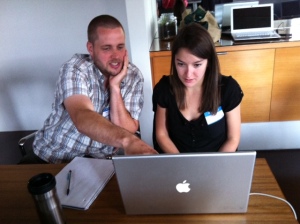 Making these events get bigger and better will rely on getting more leadership involved. If you’re interested in organizing (or co-organizing) an event in the Seattle, contact the team through the group page.